fun in the sun 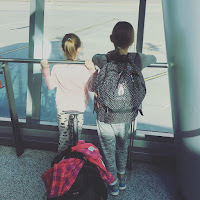 Our December started off with a bang this year, as we boarded a plane and headed south. We were heading to Florida for 11 days, with the first five spent at Disney World, followed by a short stay with my family in Ormond Beach. We didn't fly out until late afternoon on the 1st, so had a little time to pack the final items, load up the car and the kids and drive to the Buffalo airport.

It had been two years since the girls' had flown, and they were beyond excited. (Quite frankly, I think they would have been excited if it had only been two weeks since their last flight, but that's beyond the point!). We flew from Buffalo to Atlanta where we had a rather lengthy stay - this one is my fault (as my husband would quickly tell you!). There was a flight 45 minutes after we arrived, but I decided to take the longer layover to avoid and crazy rushes between flights, or the ever-common American carrier giving away our seats if our first flight was a little behind. So....we had 4 hours to kill in Atlanta. Thankfully that passed quickly, then we were off to Orlando, and our final destination, Disney World.

It was late and dark by the time we arrived at Disney, but it's always a good feeling. With Florida being my summer and March Break home as a kid, I'm no stranger to the Magical World, but even at 36 years old, I still get a little jolt of excitement every time we drive through those gates and begin to see mouse ears on everything. We settled into our hotel room, and were ready for the fun to begin bright and early the next morning. 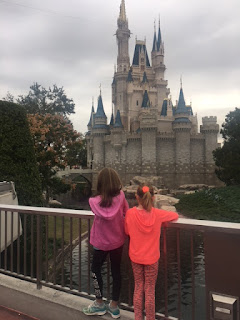 I was attending a conference, so my days were filled with amazing learning - which meant Cal and the girls spent their days by the pool. Gratefully, the weather was absolutely beautiful, and they swam for at least three hours every day, and spent the rest of the time enjoying a life of leisure. In the evenings we found our way to Disney Springs, the outlets and spent one night at the Magic Kingdom too!

For Lady A & Lady M, this was their second time at Magic Kingdom, the first being on that trip two years ago. At ages 9 and 6 (and a half - Lady A would have me remind you) they were so perfectly suited to the park. We hit up multiple rides that we hadn't done before, including the Barnstormer, PeopleMover, Carousel of Progress, and one of my all-time favourites - It's a Small World. It was as beautiful and fabulous as I remembered. We also took the kids to the Tomorrowland Speedway, where we allowed our two children to get behind the wheel of a go kart. I had Lady A, and Cal had Lady M and they both drove like complete MANIACS, giggling loudly the entire way. I think we all came away with a little bit of whiplash, and a clear understanding as to why children cannot have a driver's license, but they are still talking about this ride several weeks later! We finished off the evening with Peter Pan's Flight - a favourite from our last trip - and after enduring an extra long line-up thanks to the ride breaking down briefly, we flew through Neverland to close off our day. It was, as they say, magical.

After our multi-day stay drew to a close, we hopped in our rental car and headed for Ormond Beach. This is the place where I have loved going since I was a little girl, and now my kids love going just as much. (Cal seems to go more often than all of us, so I think it's safe to say he loves being there too!) A visit to see my aunt, uncle and cousins is a guaranteed good time, and spending time with them  was wonderful. We managed a little more outlet shopping, visited the Christmas light display at Daytona International Speedway, decorated my Aunt's Christmas trees (both large and small), and most importantly, just spent time with family.

While the weather was warm for the first part of our trip, it began to cool off in the latter few days, but that didn't stop us from a visit to Daytona Beach. I packed up a picnic and off we went, planning to just take a little walk in the sand. When we arrived, we found a playground/picnic area that overlooked the water and hung out there as the tide was so high that we couldn't go down to the beach. The girls played and played and looked out over the water, taking great joy in watching two men who were surfing a little ways out. We ended up spending a good amount of time there, that sure enough the tide headed out, and we descended the stairs to the water. 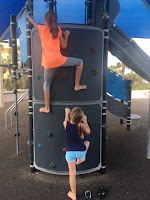 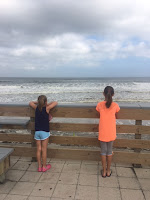 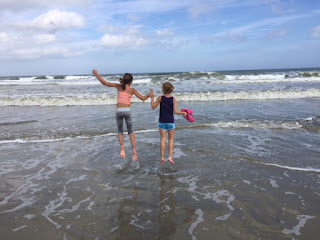 Lady A was horrified at the thought of getting sand in her toes, but quickly got over it as the girls did handstands and cartwheels up and down the beach. Slowly, they became extra brave and worked their way further and further into the water. They had both - smartly - put bathing suits on under their clothes "just in case", which worked out in their favour. In no time, my brave little Canadian girls were in the water, soaking up every minute. As a baby, I'm told that one of my favourite things to do was to stand in this very stretch of beach and yell "pum waves, pum get me!", so I suppose they come by their love of the beach honestly. They happily hopped the waves for ages.

Our last night, we headed back to Orlando to stay at a hotel in preparation for an early morning flight. I had booked it a little close, and was scheduled to land in Buffalo at 12:30pm, then needed to be back at my office to teach a course at 4:15pm. (No problem, right?!) I was prepared; we had a carry on bag that had all of our clothes for the flight and a work outfit for me to change into when we got home. Everything else was packed away in the main suitcases back in Ormond. As we boarded the flight in Orlando bright and early that Monday morning, the gate attendant said that she would take our carry on suitcase and put it straight through to Buffalo. I didn't think much of it at the time.

But as we watched our three suitcases come off the conveyor in Buffalo, followed by nothingness...and then a completely empty conveyor...we knew one was missing. I went to speak with the Delta representative, who made some calls for me, telling me it was likely on a different flight from Atlanta. (As you may recall, I didn't have time to wait in Buffalo...I had a course of 30 people waiting for me!). But, patience paid off, and shortly thereafter, a Buffalonian in his security vest came upstairs with our lost bag. Turns out it was completely soaked (inside and out), so it appears likely that it was left in a snowbank, but we had our stuff!!

We got back to our house at 3:03pm; I quickly changed and got ready for work then headed to the office. A quick glance at the time confirmed that I would have enough time to swing into Tim Horton's for a tea, and then I arrived in my training room at 3:58pm, hot tea in hand! WIN!

I was so grateful for the time away with my family. We had some amazing adventures, shared a million laughs and spent time with some of our favourite people. What a great way to kick off December!